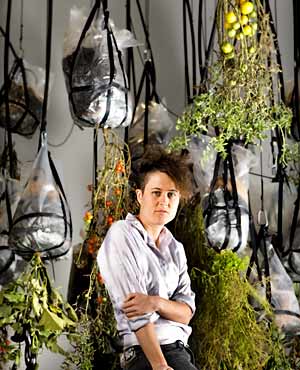 Alicia Frankovich (b. 1980) lives and works in Berlin. She is concerned with the idea of spectatorship within performance and exhibition formats, often questioning the art encounter merging artwork and audience. She constructs situations that are simultaneously spontaneous and controlled. Often working with untrained bodies – people who perform in her works play themselves, chosen as agents who embody their particular profession, or selected identity as both individuals and as groups.

Her recent solo exhibitions include: Today this technique is the other way around, Kunstverein Hildesheim, 2013; Germany, Gestures, Splits and Annulations, Künstlerhaus Bethanien, Berlin, 2011; A Plane for Behavers, ARTSPACE, Auckland, 2009. Her work was also shown in the following group exhibitions: The Real Thing? Palais de Tokyo, Paris; The Space Between Us; The Anne Landa Award, Art Gallery of NSW, Sydney, 2013; Dublin Contemporary, Terrible Beauty: Art, Crisis, Change and the Office of Non-Compliance, 2011. In addition she has recently presented performances at: MSGSÜ Tophane-i Amire Culture and Arts Center, Istanbul, 2013; The Office (Berlin) and Le Bureau/ (Paris), The Frankfurter Kunstverein, Frankfurt 2012 and Hebbel am Ufer, HAU 3, Berlin, 2011.